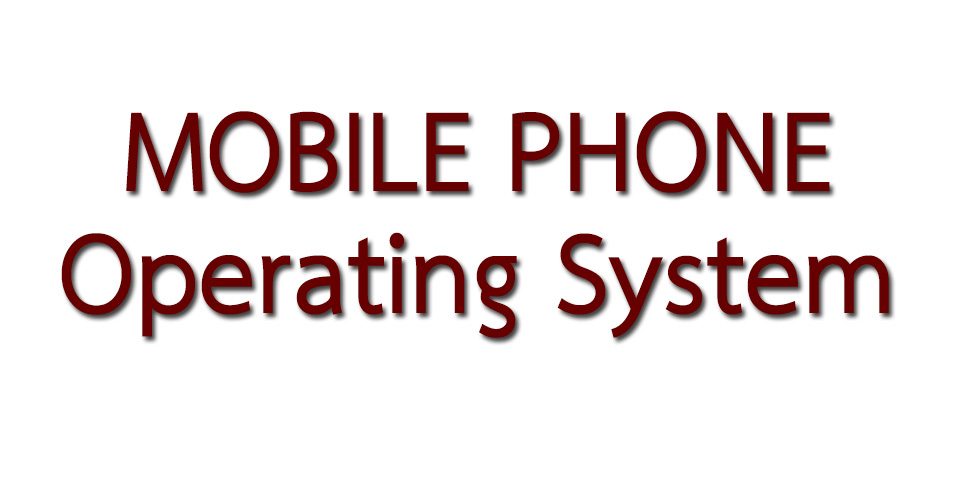 The mobile operating system is a set of programs that have been cataloged of low level and that allows to extract certain peculiarities of a specific hardware and provides different services to the mobile applications that are going to be executed and therefore to work within it. The mobile operating systems are simpler and are aimed at having wireless connectivity, to reproduce without problems all kinds of multimedia formats, along with other information.

2- Parts that any operating system has.

The operating system of a mobile is composed of several parts that are the following:

3- Types of operating systems.
3.1- Android.
It is the market’s leading operating system. It is based on the operating system of the Linux computer. At first it was designed for professional cameras, then it was sold to Google and has been modified for mobile phones or tablests. The company that created the operating system is Android Inc, was founded in 2003, was bought by Google in 2005 and launched in 2007.
It has a kernel in the system that allows you to convert the secret java code of the applications.

3.2- Apple IOS.
It is the operating system that Apple’s mobile devices have, that is, the iphone and ipad. It is a very simple system to use and its optimization makes many people opt for it for their devices. Every year, Apple releases a new update for its users with exclusive content. It was launched in 2007.

3.3- Microsoft Windows Phone.
It is the operating system developed by Microsoft. It contains a user interface with exclusive Microsoft products such as the ondrive.
Compete with android and IOS. Due to the fragmentation and in 2015, Microsoft decided to cancel this operating system to focus on a more modern and versatile one. This new operating system will be available for all types of platforms.

3.4- BlackBerry.
It is a system developed by Research In Motion and presented in 2010. The development has focused on the multimedia part, towards the user, but without neglecting the professional part. It is also responsible for showing the first integration of social networks on a mobile device, along with instant messaging applications. Rim is going to give the user a new experience that he doesn’t know so far.

3.5- Symbian.
It is an operating system that was created thanks to the alliance of several electronics companies such as Lenova, LG and Motorola among many others. This allowed Symbian to be one of the pioneer and most used operating systems on the market at the time.

The goal was to create an operating system that competed with Windows Phone. It is a compact collection with executable codes and several files, most are linked libraries.

3.6- Firefox.
It is a mobile operating system, which is based on HTML5, but with a Linux kernel. Intended for mobile devices and tablets. It is developed by Modzilla Corporation under the support of Telefónica, together with volunteers who have helped to develop it worldwide.

It is focused on all types of mobile devices, including the low end. It is designed so that HTML5’s own applications can work on this type of device.

In 2013, Modzila announced its exit to the world market, more specifically in European and Latin American countries. There are also certain mobile phone companies that have teamed up to sell devices with this operating system.